You are here: Home / Developing Creativity / How to live better with our racing mind

“My mind goes a mile a minute.”

Many creative and high ability people experience “an abundance of physical, sensual, creative, intellectual and emotional energy that can result in creative endeavours” as giftedness consultant Lesley Sword describes intensities or Overexcitabilities.

This intensity can drive imagination, intellectual achievement and creative expression – but also lead to overwhelm and stress.

[One of many articles on my various sites about the topic: Overexcitabilities in Gifted Children By Lesley Sword – “The term ‘overexcitability’ conveys the idea that this stimulation of the nervous system is well beyond the usual or average in intensity and duration.”]

One example of high intensity: actor Sandra Bullock has commented:

“I like to iron. Ironing is comfort. It’s control. I’m a nutty person who likes to make sure everything is in its place. I am a big ball of high energy and organization and structure. Don’t forget, I’m half-German.”

“Listen, I know I’m not easy to deal with. I’m controlling, and I want everything orderly, and I need lists. My mind goes a mile a minute. I’m difficult on every single level. I’m aware that I can be annoying.”

Bullock has also commented about letting go of anxiety – one potential ‘side effect’ of our racing mind.

In an interview about her movie Gravity (2013) she said, “It’s about rebirth. How do you let go in the worst possible situation so you can have some kind of release and peace?

“Life is not going to stop coming at you. In the end, you just have to say, ‘I have no control.’ Your time is precious. Are you really going to waste it worrying about this stuff?” [imdb.com] 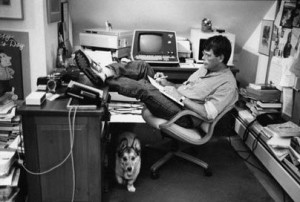 Another example of a creative person who lives with intensity is Stephen King – he has said:

“I’ve taken off two months, three months at a time, and, by the end, I get really squirrelly.

“My night life, my dream life, gets extremely populated and crazed.

“It’s as though something in there is running all the time.”

How to quiet mental chatter

Tree Franklyn is an author and artist who “helps empaths and highly sensitive women overwhelmed by their sensitivity to manage and release their deep emotions.”

In one of her articles, she points out that “While many people struggle with an overactive mind, especially in times of adversity, the Highly Sensitive Person (HSP) is hard-wired with it.

She notes that according to psychologist Elaine Aron, our HSP (Highly Sensitive Person) brain “processes information and reflects on it deeply so we notice more, which naturally leads us to become easily overstimulated and overwhelmed.

“So if it’s an inherent trait, how do we detach from our racing thoughts when they’re on overload?” 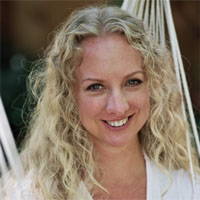 Franklyn spoke with Madisyn Taylor, co-founder and editor-in-chief of the popular inspirational website, DailyOM.com, about being an HSP and how she quiets her mental chatter.

“Before learning how to use her highly sensitive traits in a positive way, Taylor says, ‘I suffered daily. What most people take for granted like waking up in the morning was a nightmare for me.

‘Everything about being out in the world was painful from sounds to lighting to crowds. The way people interacted with people was painful to watch.’

“Madisyn has since found peace with her high sensitivity, being featured in the film, ‘Sensitive — The Untold Story‘ and has used her natural sense of empathy to build a successful business with DailyOM.

“When she finds her thoughts starting to race, she practices a quick method to quiet her mental chatter.”

Come Back To Center

Taylor says “I just stop, take a breath and center. This happens very quickly for me now as I have been meditating for many years. Anybody can learn to do this and if you’re a parent, you probably already do it when you count to 3 in order to calm down.”

Franklyn adds, “If you’re not an experienced meditator, or even if your incessant mental chatter has overridden your years of practice, counting is actually a quick and easy method of quieting the mind, and you don’t need decades of sitting in lotus position on a mountaintop monastery to do it.

“Counting is a form of distraction, says Don Joseph Goewey in his book, The End of Stress: Four Steps to Rewire Your Brain.

“He writes, ‘Under extreme stress, we lose cognitive and emotional capacity. As a result, all we perceive are problems we can’t solve.’

”This is why our minds seem to race around in constant circles, going over the problem again and again in an endless loop. Because it’s so active, we think we’re solving problems, but from a neurological standpoint, we’re actually creating more.

“When you distract your brain long enough from your overwhelming thoughts — and it could be a mere matter of seconds — you prevent a ‘massive dump of stress hormones,’ as Don puts it, in your system, which allows you to reconnect to your higher brain functioning, becoming more clear, calm and quiet.”

Franklyn says, “Guided meditations work because you don’t have to actively try to quiet your mind, in fact no mental effort is required at all. You simply put on some noise-canceling headsets, relax and allow your thoughts to be guided by someone else.

“My new favorite is a 34-minute guided audio by Madisyn created specifically for HSPs called ‘Meditation for the Highly Sensitive Person.’

From How to Quiet Your Racing Thoughts When You’re Highly Sensitive by Tree Franklyn, HuffPost 10/06/2015.

Learn more about ‘Sensitive — The Untold Story‘ and see video clip in my post Elaine Aron on the trait of high sensitivity.

You can find a link to purchase the MP3 meditation album ‘Meditation for the Highly Sensitive Person’ by Madisyn Taylor and hear a sample in my article Meditation for Emotional Health and Creativity.

Another very popular post by Tree Franklyn is “An Open Letter to Everyone Who’s Ever Called Me Too Sensitive” – see quotes and link in my Facebook/Highly Sensitive and Creative post.

Lena Dunham on Creating and Meditating

We have a mix of brainwaves at different frequencies, and this activity can be affected by external stimuli and induced into patterns associated with sleep, being relaxed etc. 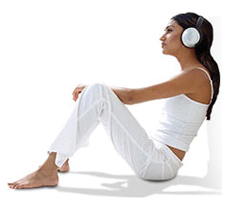 He notes he is working with Deepak Chopra, M.D., and Dr. Rudy Tanzi, Kennedy Professor of Neurology at Harvard Medical School, co-authors of the bestselling book Super Brain.

“Brain Wave Entrainment is any procedure that causes one’s brainwave frequencies to synchronize with a periodic stimulus (sound, vibration or light) having a frequency corresponding to the intended brain-state (for example, to induce a trance, dreams, sleep or relaxation.)

“It is also called the Flicker-response because of how staring at a campfire or the flickering of a burning candle can lull you into a state of calmness and serenity.”

Binaural beats are a form of stimuli to cause entrainment. For example, if you listen to a sound at 1000Hz in one ear and a sound of 1004Hz in the other ear, the brain creates a response for the difference between the two: 4Hz.

This 4Hz beat is similar to our natural brainwave pattern while sleeping.

One commercial form of Brainwave Entrainment is Holosync – which I use multiple times per month to enhance stress relief and relaxation.

Therapist Sarah Chana Radcliffe says she has used Holosync audio CDs for years to benefit herself and her clients, and says :

“I make it as a suggestion to clients who are experiencing stress, who are very anxious, or just need a fresh reworking of the brain.”

From Psychotherapist Sarah Chana Radcliffe on technologies for growth.

How Holosync Works, By Bill Harris

Ken Wilber is a writer, philosopher and public speaker, with 25 books translated into some 30 foreign languages.

[Roger Walsh M.D., Ph.D., a professor of Psychiatry, Philosophy, and Anthropology at UC Irvine’s College of Medicine, declared “Ken Wilber is one of the greatest philosophers of this century and arguably the greatest theoretical psychologist of all time.”]

“It’s the same pattern that it gets into in deep formless states of meditation.

“And so using something like binaural beat technology, you can get into deep formless states of meditation in a matter of five or 10 minutes.

“It will take meditators just working on their own, usually several months to be able to learn how to do that.”

He notes there are “several companies that sell programs including Holosync and iAwake.”

From conversation between Ken Wilber and Vishen Lakhiani in the Consciousness Engineering series by Mindvalley Academy.

See much more in my article Biofeedback and Wearable Tech for Stress, Meditation and Fitness – which includes information on related biofeedback technology such as “Muse: the brain sensing headband” and HeartMath devices.