You are here: Home / Acting / Performing / Jesse Eisenberg on exactitude and too much attention 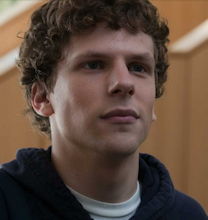 Many talented artists share traits such as perfectionism and a need to “get it right” – and also high sensitivity, which can make fame and attention very stressful, even overwhelming.

See the post Kristen Stewart and shyness and sensitivity for one example.

In her article “Jesse Eisenberg on playing Facebook founder Mark Zuckerberg in ‘The Social Network'” (Los Angeles Times, Sept 27, 2010), Amy Kaufman described the actor as showing up for the interview irritated from accidentally seeing the last 30 seconds of the movie, that he had been avoiding it because he doesn’t like to watch his own performances.

“I’ve been so furious this whole morning about what I did in that scene,” Eisenberg said. “It’s just uncomfortable to watch me. Not in the same way that it’s uncomfortable to listen to your voice on an answering machine. I just felt that I didn’t get the scene right.”

Kaufman adds, “Given that the 26-year-old’s portrayal of an aloof, socially awkward Zuckerberg during the founding years of Facebook has already sparked some award buzz, Eisenberg’s self-critique may sound like typical false Hollywood modesty. Yet Eisenberg genuinely seems more panicked than excited by any acclaim.

“It feels like — and again, this is just the way my mind works, which is why I go to therapy twice a week — I immediately think that there could be nothing worse than getting that kind of attention,” he said.

“Because, how can you maintain that kind of level of interest and attention? And I really have worked hard and done well in other things that have gotten no attention. So it makes you feel like those kind of things are inconsistent.”

“It wasn’t important to us that Jesse do an impersonation of Mark Zuckerberg,” [screenwriter Aaron] Sorkin said in an e-mail. “Jesse came to work knowing the scene he had to do that day, and how he prepared — whether it was listening to Mark’s voice, fencing or standing on his head — was entirely up to him.”

But Eisenberg was exacting. During one scene in which his character is being deposed and has a notepad, he jotted down which takes he considered best.

For the 18 days of rehearsals and 72 days of shooting, [director David] Fincher said, Eisenberg was hyper-aware of his performance.

“I think he wouldn’t be as good as he is if he wasn’t hard on himself. But I hope he’ll get to enjoy it…. He got the very thing that we discussed time and time again about the film, which is: I want you to figure out a way to remain an enigma, and that’s a really hard thing.”

For more on the psychology and personality of acting and actors, see The Inner Actor site.